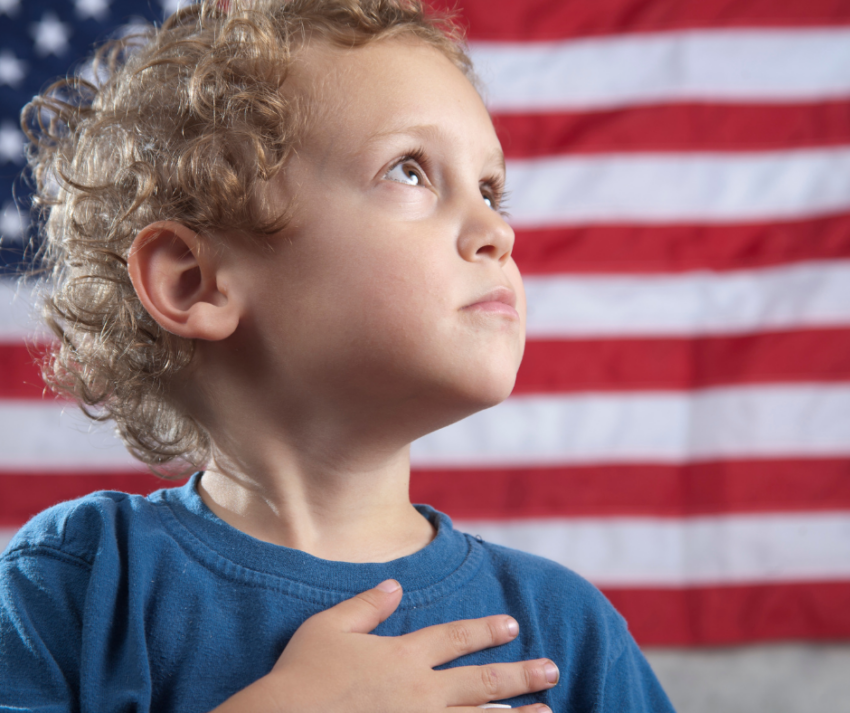 As the Director of Content and Communications for the Jerrod Sessler for Congress campaign, I am sometimes overwhelmed by the massive load of content, emails, and other communications that cross my desk (or my laptop) on a given day. But a conversation with Jerrod is always a welcome break from my duties because it reminds me of why I do this. His passion for the country, his zeal, and his determination to restore America to the values of its founding affect everyone he encounters, especially his staff and volunteers.

A few days ago, in the middle of a very busy, campaign-activity-packed day, he sent me a message that said: “Have you ever wondered how the Pledge of Allegiance would sound if we took every word and simplified it? Most of us say it, without thinking about the meaning of every word. I’ve been thinking about researching every word and rewriting the pledge in simplified form so that young people will know the power of the words they are saying and the beauty of the promise they are making.”

It amazed me that in the middle of fundraising, raising awareness for January 6th detainees, organizing a prayer rally, and spending time with the voters in the 4th district explaining his pro-America stand, Jerrod was worried about young people lacking in the understanding of the pledge many of them still make every morning in school and I knew, once he had it in his mind, he would not rest until he had found the time to research and write out the pledge. So, I decided to take a break from work and do it for him.

First, I looked up the keywords in the Pledge of Allegiance and wrote out their meanings. This is how it came out:

I pledge (solemn promise or undertaking) allegiance (the loyalty of a citizen to his or her government or of a subject to his or her sovereign) to the flag ( the symbol or emblem of a country) of the United (joined together politically, for a common purpose, or by common feelings)States (a nation or territory considered as an organized political community under one government) of America, and to the republic (a state in which supreme power is held by the people and their elected representatives) for which it stands, one nation (a large body of people united by common descent, history, culture, or language, inhabiting a particular country or territory) under God (the creator and ruler of the universe and source of all moral authority) indivisible (unable to be divided or separated), with liberty (the state of being free within society from oppressive restrictions) and justice (the quality of being fair and reasonable) for all.

And this is what the pledge we make to the flag would sound like in modern-day English:

I solemnly promise and undertake loyalty as a citizen to the symbol or emblem of my country, the nation joined together for one common purpose, under one government, America. And to the state in which supreme power is held by the people and their elected representatives, for which it stands. One large body of people, united by common descent, history, culture, or language, under the creator and ruler of the universe and source of all moral authority, unable to be divided or separated, with freedom within society from oppressive restrictions, and fairness and reasonableness for all.

Re-reading the pledge in its simplified form, I was struck by its potency, the unification it inspires, and the liberty it assures us of. Jerrod was right. By the banality of rote repetition, we have forgotten how powerful this pledge is as a reminder of who we are as a nation. We have rejected the authority we govern by and the authority of the One we are governed by. And we have disregarded the freedom we are afforded as a benefit of our citizenship of this outstanding nation.

I’m writing this piece because I hope, as Jerrod does, that it inspires some young person to realize the value of what we are given as one nation, under God.

It is the reason every person on our campaign supports and pours out their hearts for this campaign and our leader, Jerrod.

Because we know, without a shadow a doubt, he will fight to preserve it.