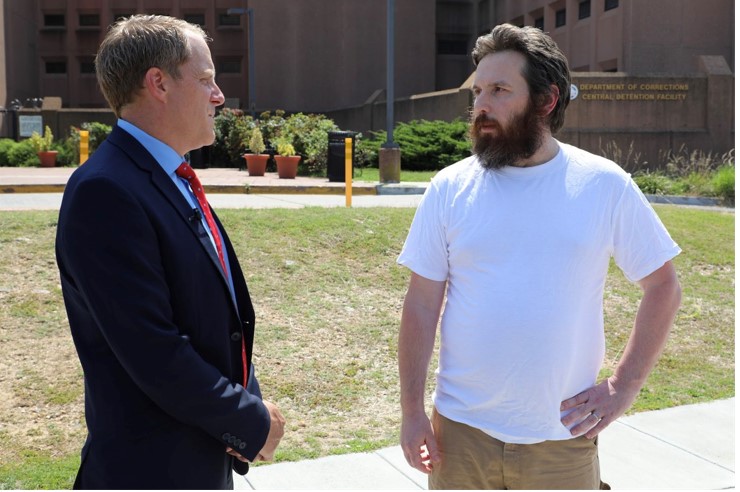 Unless you’ve been hiding under a rock for the past couple of weeks, you’ve probably already seen the video of Jerrod and Jan 6th detainee Karl Dresch. The video has been making wave since the day it first went up because it highlights the injustice of holding a man in solitary confinement for, at times, more than 24 hours a day, for the crime of “Parading,” while members of the opposing party are bailed out and excused for much more serious crimes.

Here’s the backstory to the video.

About a month prior to this video, Jerrod had put out a press release promising more information on the plight of the 1/6 detainees. This cause has been very near and dear to his heart because, having been there himself, he knew that most of the people involved were innocent victims of a plot to stain the fight for election integrity.

On August 13th, Jerrod and his son decided to stand outside the DC jail and film a video calling attention to the detainee situation. They were stopped by jail police, who tried to keep them from filming, but after politely standing their ground, they proceeded to film. That’s when Karl Dresch, a January 6th detainee who has been in that jail since March, walked out. Upon seeing Jerrod’s passion for the people inside, Karl walked up to Jerrod, struck up a conversation, and agreed to share his story for the first time.

Here’s the video of that interview:

The interview struck a chord with hundreds of thousands of people who have shared and learned more about the situation facing the January 6th detainees.

Karl has since returned home and is trying to put his life back together after his horrifying ordeal.

His wife shared her side of the events on a Christian fundraising site named Givesendgo:

During our return home on the 16th, from our DC trip, we received the news that my father passed of cardiac arrest due to Covid-19. Karl immediately drove me to care for my mother who was also suffering from the illness, and then to help make funeral arrangements for my dad. He returned to our home to attend to what was needed before he was to travel back; pay on our bills, mail my calendar, pick up his son from school, and then return to SC for his father-in-law’s funeral. However, January 16th ended up being the last day I’ve been able to see my husband. While running errands on the 19th, he was stopped by the police with warrants and taken to the station as feds were ransacking our home.

I returned to our home in MI and the feeling of being violated was sickening, they had flipped and ripped mattresses, keepsakes dumped out of storage totes and tossed clothes and items out of closets, it was “ransacked.” I was now alone to grieve the loss of my husband and father.

Since that day, the mainstream media outlets have repeatedly written fictitious portrayals of his intentions and actions and is facing several indictments for attending the protest. He was denied bond and dragged through five different prisons before arriving in DC in May to only be denied bond again. My husband is a gentle and kind man and caused no damage and was not violent. He was turned in by a stranger to the FBI on a tip from pictures online, along with false information of who we traveled with and how we arrived. Many people from our community have written letters on his behalf to his appointed judge. Our late Sheriff, Mayor, Pastor, family, and friends let the judge know he was not a threat to our community.

I’m asking for prayers for his last chance to come home to his wife and son during pre-trial. His case is currently being reviewed in appellate court and we are waiting for the ruling next month. He like many others there has been denied basic human rights and proper medical attention.

My husband was the sole provider of our household and has been detained now over six months. Please remember us in prayer and please consider helping our family recover from losing all our savings for believing in Freedom of Assembly and Freedom of Speech. As well as for me to keep everything together and obtain additional part-time employment to offset the costs of carrying this burden.

If you would like to support the Dresch family, who have been through so much, please contribute on their Givesendgo page, which can be found here:

We need men like him who will not back down from fighting for Americans and American values.